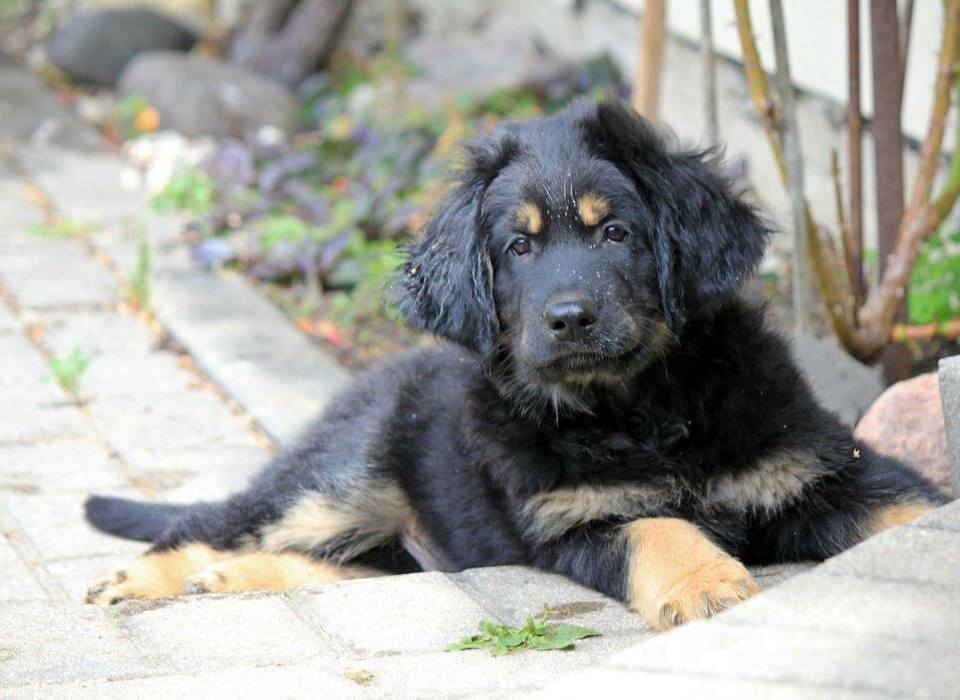 It depends on the dog owner what the dog grows into.

A puppy school is especially necessary for a person who has a first dog. The dog owner is taught how to make good contact with the dog. In addition, the puppy school is good for socializing. Puppies learn to communicate with their peers (different breeds, different body languages, different situations) and strangers. Learning takes place in a playful, friendly environment.

For those who want to do some sports in the future, a puppy school is a prerequisite.

Facebooki group 'Training for dogs and dog owners' can help you find a suitable dog school. 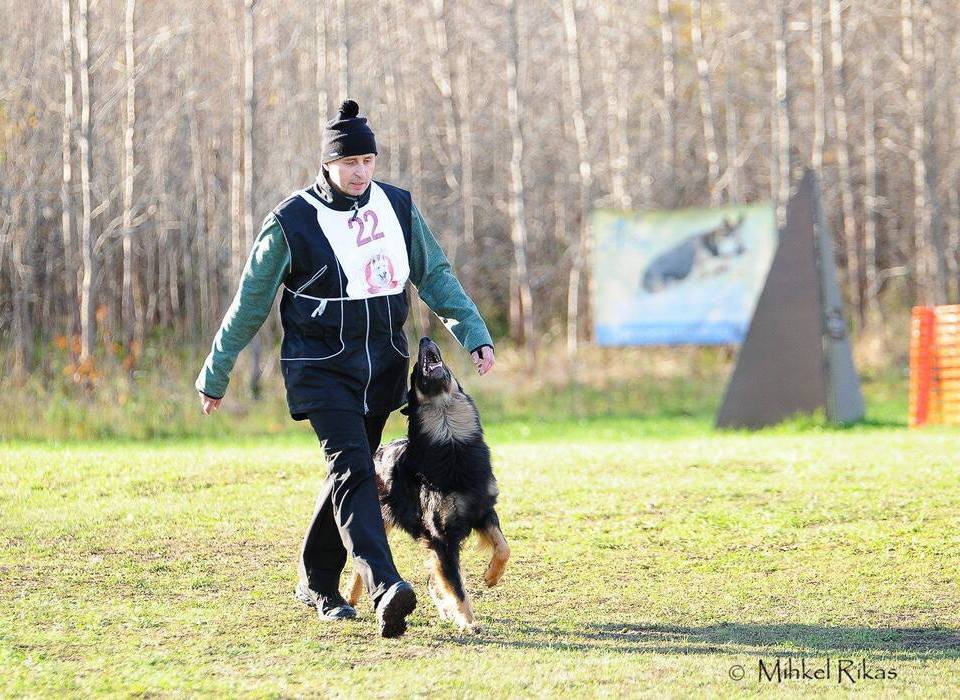 Obedience training is an area of ​​training practiced only in Estonia.

In the first stage, the dog must walk next to the owner's left leg, both with and without a leash; be in permanent lying down; remain on the order to sit and lie down when the owner himself moves away; come to; go there; Bring the item and jump over the barrier. If the dog has achieved a "satisfactory" grade in the first stage, it can compete in the second stage, with the addition of a gunshot test, to which the dog must not react. The elements to be performed have also become more complex and the distances longer (for example, the object must now be brought to the owner by jumping over the barrier). In the third level, the dog has to work even longer distances - the dispatch takes place from a distance of 40 steps; the object must be brought to the dog by a barrier more than 1 meter and permanent lying is performed without seeing the owner.

In the picture you can see Madi Nõmm and Armi - Estonian Training Area Champion (EST KK CH) and have come third at KK EMV twice. For two years, he has been second in the KK category of the best sports dogs of the year. 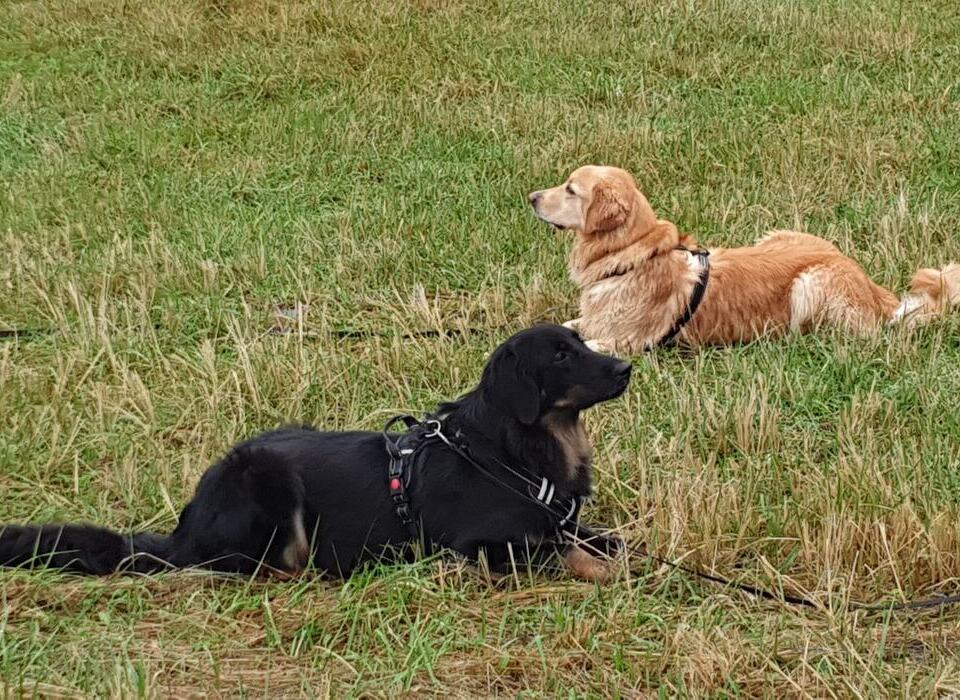 Rules and guidelines for obedience kodulehelt.

Obedience is an international field of training.

There are four levels of difficulty in the competition: primary class (national class), SK1, SK2 and SK3. Dogs at least 10 months old can take part in obedience competitions. In the SK primary class, the dog must be able to walk, lie down, sit, stand, approach, stay still and cross a low barrier. Higher classes include bringing an object, remote control (the dog is instructed to "sit", "lie" at a distance), choosing the right object from three objects, standing or lying on the approach, and other more difficult tasks. 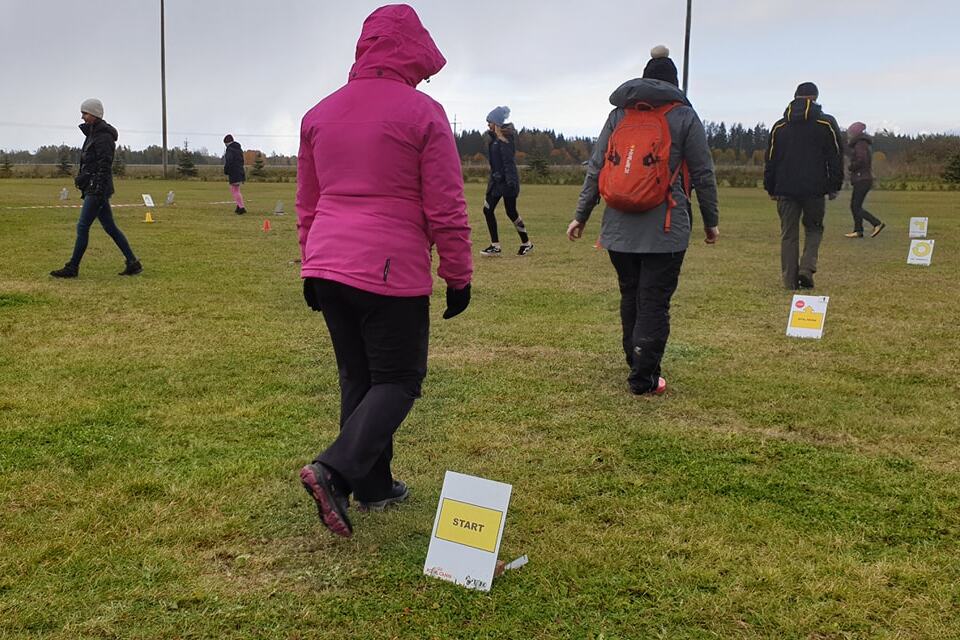 Dog sports based on joy, communication and cooperation.

A relatively new and gaining popularity in Estonia, where the main emphasis is not on accuracy, but on communication and cooperation between the dog and the dog handler.

Rally obedience is a combination of elements of obedience, dog dancing and agility. A track with different techniques will be posted on the square, the techniques are written on the so-called numbered command signs. Before crossing the track with the dog, the dog handler can get acquainted with the track (command signs) independently.

The handler may communicate with the dog on the track, including constant oral praise and encouragement (eg clapping). Commands can be verbal, handwritten, or a combination. It is forbidden to adjust the dog by pulling it from the leash or touching it with your hand (eg pushing it into position), as well as punishing the dog, fighting it and not adversely affecting it at all.

The test consists of three parts: the A-obedience part, the B-district and the C-theory exam (optional). Part A consists of a sidewalk with or without a strap; a group of people must pass; staying seated; lying and accessing. The dog must also lie down in a disturbed situation while the other dog is performing. The purpose of Part B is to find out the dog's attitude towards people and other animals and his confidence in his surroundings. The dog's attitude towards the group of people, cyclists, cars, runners, skaters and other dogs is examined. 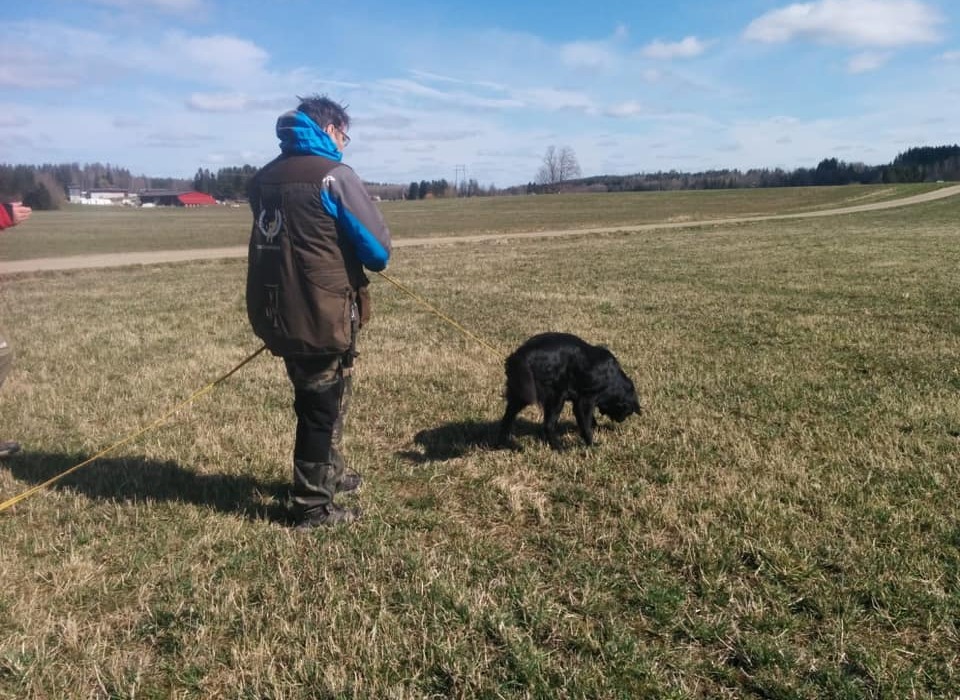 The field trace is the national dressage area of ​​Estonia, which consists of two parts: trace and obedience.

Both parts are evaluated separately and the points obtained for both areas are added together to get the dressing result. The minimum age for participating dogs is 12 months.

Trace - In the first stage, the handler makes at least 300 steps, 3 straight lines, 2 corners (about 90 degrees), 2 objects belonging to the handler, at least 20 minutes old, 15 minutes to work through the footprint. In the second and third degree, the imprint is made by a stranger and the imprint is older and longer.
Obedience - sidewalk, sitting, lying, standing, approaching, lying still, bringing an object (including jumping over a barrier and climbing over a slope), forwarding and lying, and not reacting to a gunshot.
In order to get a dressage result, you must collect at least 70 points out of a possible 100 in both tracking and obedience. 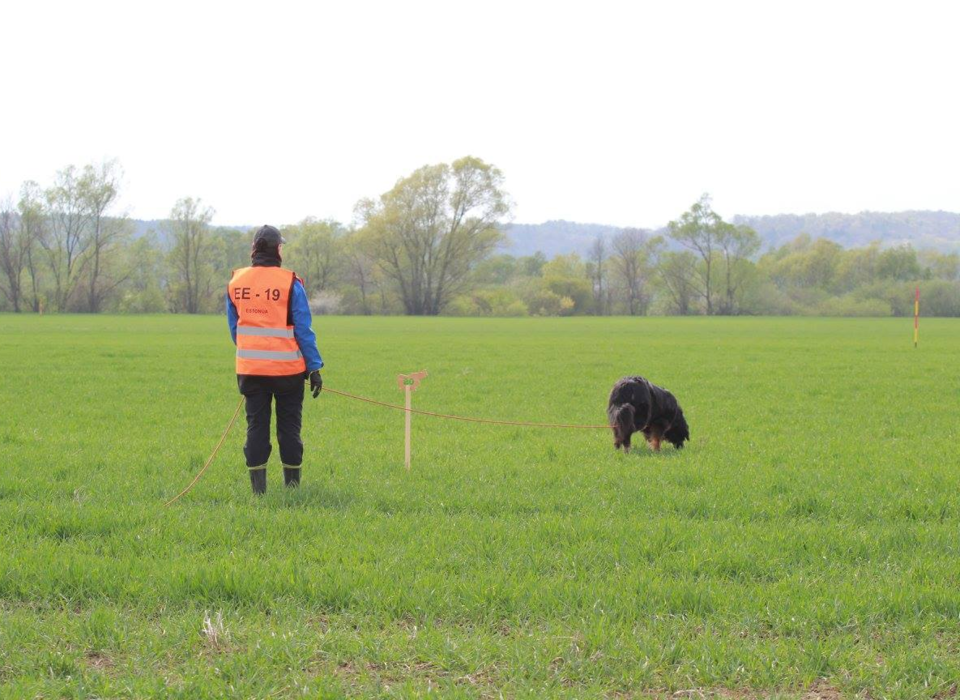 IFH is an international field of study in which the BH test is required.

To achieve the result, the dog must receive at least 70 points out of 100. The dog's willingness to work, staying on track, showing objects is assessed.

The IGP-FH is a two-part competition and consists of two tracks of IFH 2 severity, which the dog must run on two different days and, if possible, one on the soil and the other on the grass. To achieve the result, the dog must receive at least 70 points for both traces. If the score for one track is lower, the dog will not score. 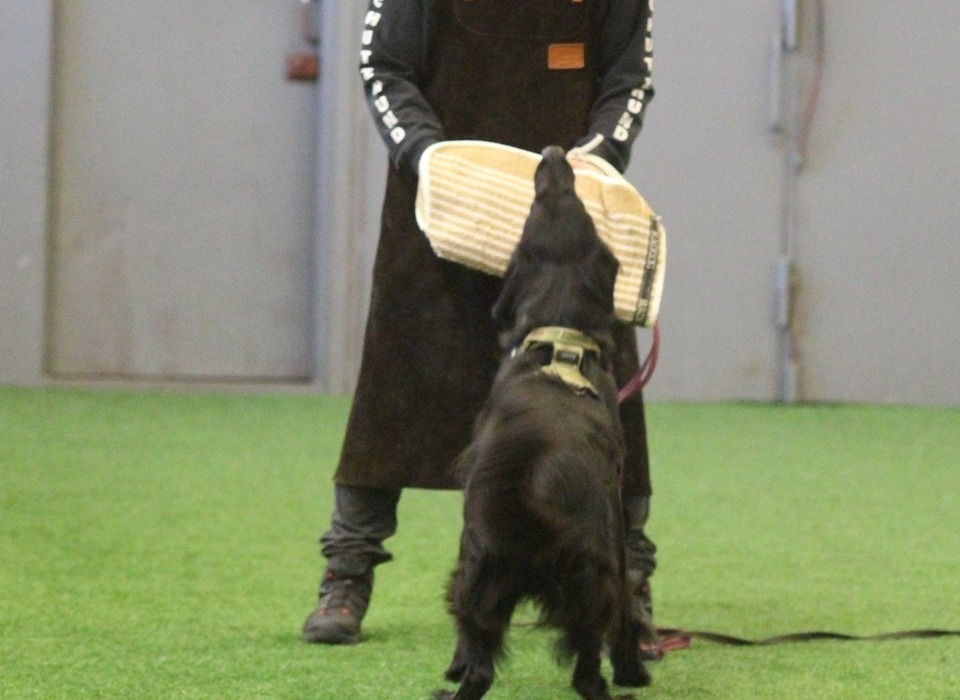 IGP is an international training obedience.

The competition consists of three parts: trace (A), obedience (B) and defense (C). The dog must receive at least 70 points out of a possible 100 in each section. There are three levels of severity in IGP: IGP-1, IGP-2, and IGP-3. The minimum age at first instance for participating dogs is 18 months.

In the first step of the IGP trace (A), the dog must trace a 350-400 step trace made by the owner. There are two items left that the dog must notify the owner of. In the second and third degree, the imprint is made by a stranger and the imprint is older and longer. The obedience part (B) of the IGP is similar to obedience training, with the addition of bringing the object over the oblique barrier, or barrier A, and forwarding. Part (C) of the protection consists of searching for shields, guarding and barking the sleeve man, preventing the fleeing sleeve man. 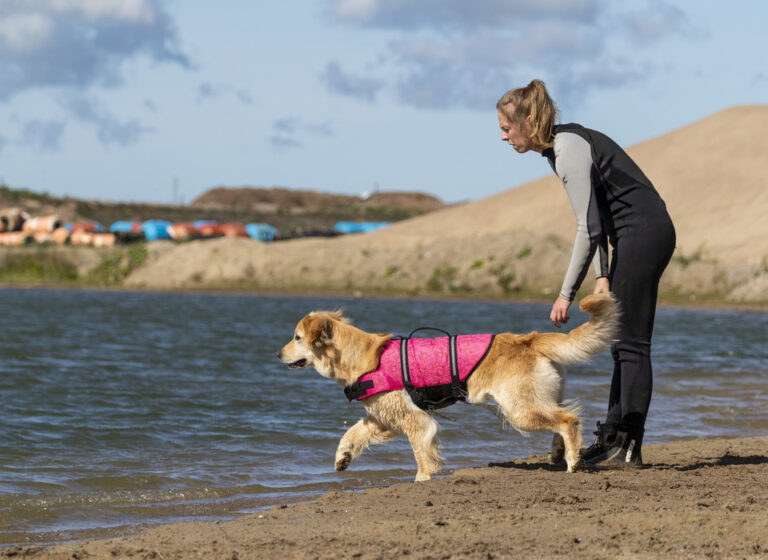 IPO - R is a very practical field of training and as the dog 's sense of smell is his most powerful and highly developed mind, he is a great help in people' s search for the forest, the landscape and the collapsed buildings .

VP is water rescue. Training is a good way to teach a dog how to behave by and in a body of water and a great opportunity to spend time with the dog.

Hovawart Lola in the picture has VP1 level. 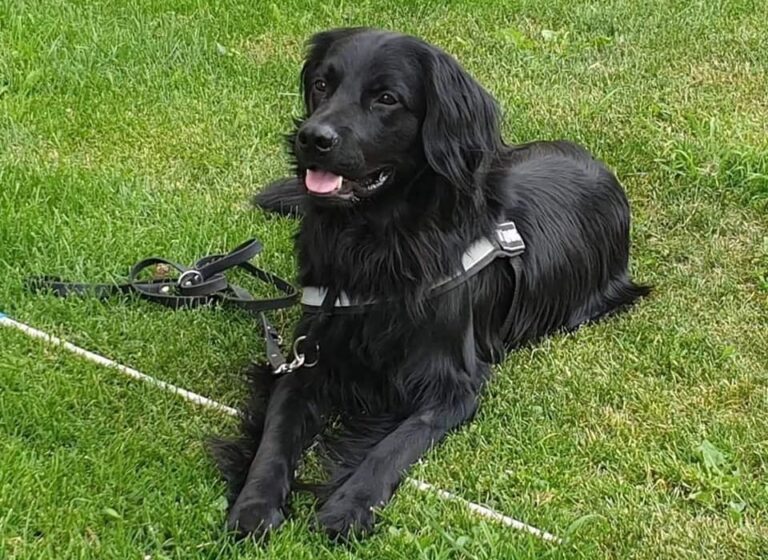 It is true that due to its temperamental and self-conscious nature, the Hovawart is more suitable for active hobbies, but we have the Hovawart Guide Dog in Estonia, who can do his job very well.

Although the training of guide dogs was started with a German Shepherd, who still account for 10% of all guide dogs in Finland, for example, in most countries it has been concluded that a Labrador Retriever is best suited as a guide dog.